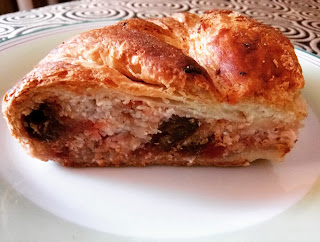 I am taking part in a Photo a day challenge for June 2016.
The prompt for the 2nd of June is #Treat and the above is my picture for the prompt.

I discovered this sweet #Treat called #Dilkhush when I moved to Bangalore and I have been a fan of it ever since.
A mix of Tutti-frutti, raisins, cherries and desiccated coconut stuffed inside layers of pastry and baked to perfection. What's not to love?:))

Since I haven't been writing/blogging at all, and I REALLY want to I thought I would use the prompts to attempt to write short stories too.


Below is my story for the prompt;

His eyes followed her around the room, and when she looked back to give him a dirty look he looked away, or hid himself behind the newspaper.
She switched chairs, so she could be out of his vision and after a while he switched his chair too, to keep her in his.
She let out an exasperated sigh and turned her back to him, till she realized she was facing a mirror and he was watching her reflection, a greedy smile on his face.
She stomped out of the room, and as she did so she noticed his crestfallen face and shot him a triumphant look before she closed the door behind her.
He sat alone, shamefaced wondering what she made of him and promised himself he would try and mend his ways.
‘Here you go, Papa your favorite laddoos’ she placed the bowl in front of him.


His face lit up and he looked up and smiled at his daughter-in-law who never forgot to make him his monthly sugar free sweet treat. He may have acquired Diabetes, but hadn’t lost his sweet tooth.