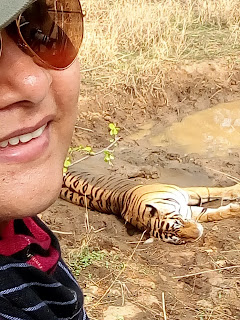 I am taking part in a Photo a day challenge for June 2016.
The prompt for the 30th of June is 'Stripes' and the above is my picture for the prompt.

That's me, next to 'Arrowhead' the upcoming tigress of Ranthambore. What could be a more apt picture for a finale?
:)

Since I haven't been writing/blogging at all, and I REALLY want to I thought I would use the prompts to attempt to write short stories too.


Below is my story for the prompt,

After a grand wedding that was the talk of the town, Mrs & Mr Sharma welcomed their daughter-in-law home. A daughter-in-law whom they were proud of and who was a perfect match for their son. She was tall enough for their 6.2’ son. She was proportioned just right to match his athletic physique. She was as educated as he was, and a fellow scientist to boot. There was one thing she wasn’t though, and it was a very important thing for Mrs Sharma, mind you. Their daughter in law, June, wasn’t a fellow Brahmin.
When Nikhil, their son, broke the news about June to them the initial reaction of his parents was shock and silence. After getting over the shock and some discussions and sleepless nights later, Mrs and Mr Sharma could see how much she meant to their son, and they embraced June with open arms.
June and Nikhil had decided to spend the first few days after the wedding in Dehradun, with Nikhil’s parents.
Mrs & Mr Sharma were touched by this gesture, and even more so when they realized it was Junes suggestion.
After their first day together Mr Sharma noticed that Mrs Sharma would get up an hour earlier than her usual waking time and a while later come back to bed and pretend to sleep again. He found this behavior strange and after a day or two of it, decided to have a word about it with his wife. He couldn’t keep the smile off his face when his wife guiltily confessed that she was getting up earlier than usual to water the Tulsi plant, wash the pooja vessels and wipe down the mandir, all before June woke up. Because, what if June, who loved to help Mrs Sharma around the house and was always eager to learn, didn’t do things properly, in the way they were was done or even worse, refused to do it? ‘You have to teach her, then trust her’ was all Mr Sharma said before he got lost in the morning paper.
A few days later he turned in bed to see Mrs Sharma sound asleep beside him. When the woke up and made his way to the porch where he had his morning tea, Mr Sharma saw June watering the Tulsi plant and Mrs Sharma getting the tea ready for everyone. He smiled to himself thinking, the daughter-in-law had earned her stripes.