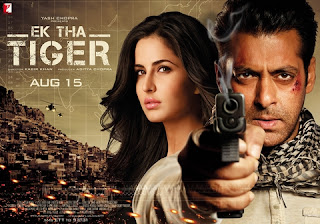 Ek Tha Tiger - - - Jo nikla Billi!
Star Rating   *
Salman Khan (Tiger), looking stressed, depressed but still well dressed, beats up and breaks more than his usual share of bones and furniture, but takes off his shirt just once.
Katrina Kaif(Zoya), botox-ed to stretched perfection and collagen-ed to acquire lips as full as Mick Jagger’s, breezes through the script togged out stylishly and emotes effortlessly, and she isn’t around when he takes his shirt off, just once.
Audience, goes with great expectations, drags reluctant Husband promising him a blockbuster film and performances, waits for both, and for Tiger to bare it all.
Movie starts, audience travels through picturesque, well shot locales of Iran, Delhi, Istanbul and Havana, and realizes that Tiger still hasn’t taken off his shirt, in a single country.
As a RAW officer, Tiger effortlessly climbs buildings, swings for one to the other, stops trams, dances, sings, falls in love, but STILL doesn’t remove his shirt.
Zoya, our friendly neighborhood ISI officer accompanies him in most of his escapades, calling him a ‘Kaddu’, perhaps because he hasn’t removed his shirt.
Love happens, followed by heartbreak, when they realize their respective professions *psssssstttttt, shirt still on! *stamping feet on ground!*
Enter hirsute, fellow RAW officer, Gopi (Ranvir Sheory) who chides Tiger, then helps him plan an escape with ‘Bhabhiji’ *Finally removes shirt in a blink and you miss it moment. Audience blinked*
Tiger realizes that he hasn’t ever climbed into an ascending aircraft from a speeding motorcycle and does just that and Zoya and Tiger escape into oblivion, leaving the chance of a sequel to be filmed.
Audience hides face at choice of films, directs a sideways glance at Husband who sarcastically calls film a blockbuster and laments the fact that Tiger removed his shirt, just bleddy once!
Star

** I don’t want my money back even though I didn’t like the movie, but director/producer may please pay for my popcorn/samosa/parking.

*** Time and money both well spent!

***** Whistle, clap, even smile at irritating neighbor-who-kept-talking-on-cell phone, queue up to buy tickets again, and extol virtues of the movie.y booked and paid 3 month trip to _________(please fill in a destination of choice)e, but director/producer may please pay for my popcorn/samosa/parking.

*** Time and money both well spent!

**** Loved it! irritating neighbor-who-kept-talking-on-cell phone, queue up to buy tickets again and extol