Book Review: The Palace of Illusions by Chitra Banerjee Divakaruni 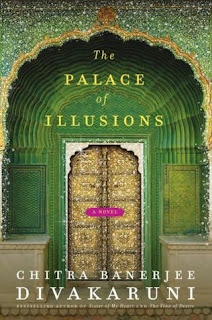 Thank you for recommending this book, Maya :)

What I know of the Mahabharata is courtesy the much-revered epic telecast on the small screen years ago. Sunday mornings meant sitting in front of the television watching the majestic Bheeshma Pitamah exuding power, the valiant Arjun skillfully battling his enemies, the enigmatic and wily Krishna using his clever words, sometimes as a soothing balm and at other times as weapons, and the duty-bound Yudhishtir always following the path of righteousness. These were the illustrious characters from the Mahabharata firmly etched in my mind, with a sporadic thought occasionally drifting towards Draupadi.

With ‘The Palace of Illusions’, author Chitra Banerjee Divakaruni places the mysterious, and not as much talked about as the other famous characters, Draupadi as the protagonist.

The first person narrative has Draupadi starting her story from the time she was born from fire when her father, King Drupad, conducted a vigorous 30 - day fire ceremony to pray for a son who would bring him the vengeance he desired. At the end of the ceremony his much longed for son, Dhristadyumna, appeared, along with his sister Draupadi, who was sent along as a, unwanted and unasked for, gift by the God’s. The voices from heaven cautioned King Drupad to take good care of Draupadi as she would eventually ‘change the course of history.’

CBD’s gentle writing gives a voice and emotions to Draupadi making the reader feel along with her as she describes her growing up years and her self-consciousness about her dark complexion, until she meets the equally dark-skinned Krishna who puts her anxiety to rest saying ‘A problem becomes a problem only if you believe it to be so. And often others see you as you see yourself.’ You then raise your eyebrow when Draupadi discovers her attractiveness and sensuality and the power she can command through them.

Draupadi’s mystifying friendship with Krishna, which almost borders on love at times, has Krishna making timely appearances to hush her anxious mind or answer her curious questions 'You were just as impatient in your past life. In meditation, you invoked Shiva. He came and stood in front of you, silent and blue as moonlight. You asked for a wish to be granted. He smiled. You asked for it again- and again. Five times you made your wish before he had a chance to say yes. Therefore in this life you will have what you wanted five times over.'

Your heart melts when you comprehend it was a love at first sight moment for Draupadi when she glimpsed the serene Karna, the bastard prince, for the first time at her swayamwar.

Her unbridled pride, temper, vengefulness, which, true to Ved Vyas’s prophecy, caused her to be remembered for causing the greatest war of her time.

CBD’s imagination of Draupadi fleshes out a character which shows you there was much more to her than just being a wife of five husbands. ‘The Palace of Illusion’s’, is a wonderful read, which educates and enlightens, about the Mahabaharata, human nature, and life.