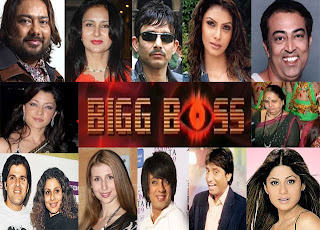 The much awaited 3rd season of Big Boss, the Indian version of the infamous reality show Big Brother, premiered on the 4th of October on the channel ‘Colors’. The interiors of the house are contemporary and colorful and Amitabh Bachchan has been roped in to anchor it, perhaps to lend some much-needed dignity to a show which is best desribed as a voyeur’s delight.

Amitabh looks uncomfortable hosting it and the fans of the show seem disappointed by the characters chosen for Season 3. If you switch on your television sets at 9 pm everyday these are the housemates you are most likely to find inhabiting the Big Boss house;

Vindu Dara Singh - The Motor mouth/Crybaby: Yesteryear actor Dara Singh’s son is tall, well-built, swears more colorfully than a sailor would and talks, nonsense, incessantly. He also cries like a baby at every opportunity, given or forcefully taken.

Poonam Dhillon – The Mummy: The Actress and former Miss India is calm, dignified and always well turned out. She prays, loves to cook, talks little and talks sense. She is equally enthusiastic, to help around the house and gracefully avoid all the trouble makers.

Kamal Khan - The Joker: This wannabe would like to believe that he is a star. ‘KRK’, as he has christened himself, never ceases to remind, whoever is interested to know, that he is a multi–millionaire. Yawn. This 2 foot, badly-dressed, aged joker is just a barrel of laughs.

Ismail Darbar - The Sloth: The one-hit wonder music director looks grimy; shirks work, puts his housemates down and does not respect the women of the house. He looks like he’s still trying to fit in, and failing miserably.

Raju Shrivastav – The Comedy of errors: Comedians cannot, should not try to be, and aren’t, funny 24*7 is what Raju has demonstrated by coming on this show. Using degrading language and poking fun at his fellow housemates behind their backs makes him look even more tragic.

Rohit Verma – The Queen: This Fashion Designer loves dressing up, make-up, gossiping, Lord Krishna, washing vessels and little else in the house. He seems like the most genuine person in the house, so far, who is delightfully politically incorrect and doesn’t hesitate to remind people of their place.

Sheryln Chopra – Huh?: Who is she? Why is she here? What makes her believe she’s hot? Why does she wear that godawful wig?

Bakhtiyar Irani – The Volcano: This television actor is the only nice-looking and decently dressed male in the house. He cooks, cleans, follows orders without complain and periodically erupts like a volcano startling everyone in the process.

Tanaaz Irani - The Matchstick (‘Kaandi’) : This television actor is terribly annoying, loves to annoy others as well, and is despised by the males in the house because of this habit. She admitted that she does it to pass time in the house. She just might have to pass out of the house soon, all thanks to her habit.

Aditi Govitrikar – The Miss-Placed: The Model and Actor looks terribly out of place here. A tumultuous personal life seems to have leached the fun and glamour from Dr Govitrikar. Hope things get better for her soon.

Shamita Shetty – The Performer: This Actress (?) cries when the atmosphere in the house is tense, is always worried about the food – situation and can’t seem to speak or understand Hindi (“what does ‘Budhwar’ mean”) Still suffering from a Shilpa Shetty hangover, behna?

Claudia Ciesla – The Unknown: Never seen her and never heard of her before. She’s enthusiastic, a big help around the house and it’s a delight to watch how she puts people in their place.