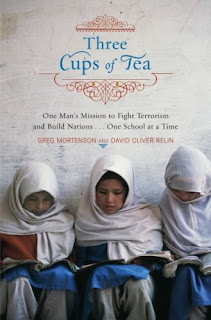 Here we drink three cups of tea to do business: the first you are a stranger, the second you become a friend, and the third you join our family, and for our family we are prepared to do anything – even die.’ Haji Ali, Korphe Village Chief, Karakoram Mountains, Pakistan.

In the year 1993, Greg Mortensen an avid mountaineer, attempted to climb the mountain K2, with disastrous results. Disappointed and dehydrated he followed his porter to the nearest village of Karakoram in Baltistan, Pakistan to rest and recuperate.

Endless cups of rancid smelling Paiyu Cha, the butter tea that forms the basis of the Balti diet and a healthy dose of the inhabitants of Baltistan’s kindness later, Mortensen recovered enough of his strength and spirit to return to the USA. But not before he promised to return and build a school for the education-deprived children of Karakoram.
Return he did, to build not just one but 55 schools spread all over the dangerous and forbidden terrain of Pakistan, in villages so remote that some didn’t even have a dirt road connecting them to the next, making the delivery of supplies for building the school an arduous task.
But Mortensen’s selfless mission to ‘Promote peace, once school at a time’ was so intense that he found roads where there were none, literally and metaphorically, and braved everything from dishonesty and the lack of money to a kidnapping and a fatwa, to keep his promise to the children of Pakistan.

Reading ‘Three Cups of Tea’ was a strangely humbling experience. Greg Mortensen’s story managed to raise my awareness, about how important a small thing like a pencil could be for some people, and via it, my thankfulness towards my own life, which has a million things I stop appreciating and take for granted.

David Oliver Relin, who has co – authored this book along with Mortensen, is a graduate of Vassar and was awarded the prestigious Teaching/Writing Fellowship at the Iowa Writer’s Workshop. Over the years he has won dozens of national awards for his work as both an editor and investigative reporter.
Which is why the, at times insipid, narration of the book surprised me. I wish ‘Three Cups of Tea’ would have been written and edited better because I did feel like it dragged needlessly in certain places. A more gifted and prolific writer could have helped bring forth the passion of Mortensen’s inexhaustible spirit and compassion even better. Nonetheless, Mortensen’s inspiring chain of achievements and the geographical and cultural insights into parts of Pakistan and Afghanistan I had never heard about, were enough to spur me on to continue reading page after page.

Greg’s work is commendable. Like mountaineer Charlie Shimanski predicted in the book, I wouldn’t be surprised either to see Mortensen get a noble prize sometime soon.

To learn more about Greg Mortensen and Central Asia Institute, the foundation he is the Director of, visit;